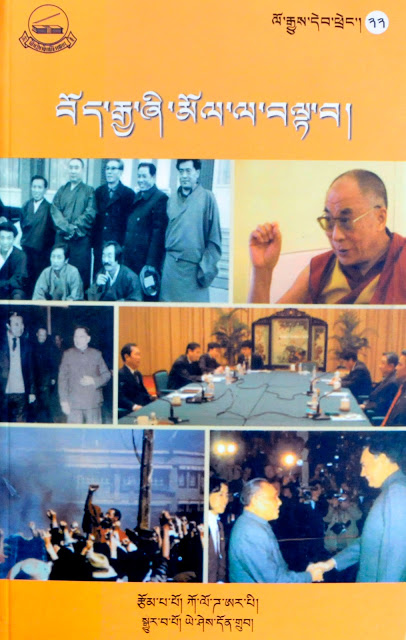 Dharamsala and Beijing: the negotiations that never were
Phayul.com reported that the Tibetan edition of my book Dharamsala and Beijing: the negotiations that never were was launched yesterday in Dharamsala by the Library of Tibetan Works & Archives (LTWA), which edited the translation.
The Dharamsala-based webiste said: “The Tibetan translation of the book Dharamsala and Beijing: The Negotiations That Never Were by noted scholar Claude Arpi was launched today by the Minister of Education (Kalon) Ngodup Tsering at the LTWA in Gangchen Kyishong.”
Geshe Lhakdor, the LTWA’s Director noted: “It may sound simple and insignificant if we just see it as a work of translation. However, we know that even translating a thin book take a lot of effort. Therefore we need to appreciate such hard work and efforts.”
While thanking those who helped make the book a reality, Yeshi Dhundup, editor at Tibet.net, took around two years to translate the book, using his after office hours and holidays; he explained: “I translated the book with a hope that it would be of some help to those who want to read about the Tibet-China bilateral dialogues in Tibetan and I hope that it would be useful to all the Tibetans.”
Kalon Ngodup Tsering remarked: “It is imperative that we know in detail about the Tibet-China Negotiations, which we often speak on. However, there are not many who have full in-depth knowledge about it. So this book may help especially those doing research works or for anyone willing to know.”

Copyright 2016 Claude Arpi
Back to top